Why More Developers are Choosing Go Lang for Software Development First presented to the public in 2009, Golang or Go is an open-source programming language developed by Google team experts: Rob Pike, Robert Griesemer, and Ken Thompson. Looking at these names, it’s not surprising that Golang has become successful. Golang's popularity has skyrocketed in the past years around the world, according to the TIOBE ranking (see the graph below). The TIOBE index measures the interest in programming languages by the number of Google search queries. As you see, Go’s rating went a little down in 2017, but since 2018 it demonstrates continuous growth, making Golang one of the 10 most popular programming languages. Moreover, Golang has managed to climb 8 positions in the first few months of 2020. 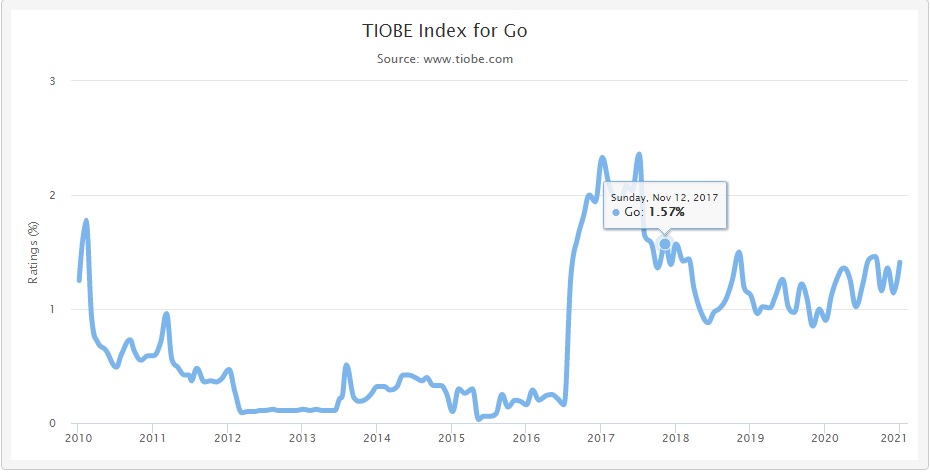 What Is So Great About Golang

Many people mistakenly think that the name “Golang” comes from the website domain “golang.org” or is an abbreviation for “Google language”. Both assumptions are wrong, and the language founders use Go as a short form for Gopher (it is no coincidence that an iconic mascot of Golang is a gopher).

Instead of building from scratch, the idea of Goland was developed on the basis of the C language. Golang is designed to simplify the software development process and increase productivity when working with large databases, multicore processors, and networks. Go’s most important feature is its simplicity allowing Go programmers to create an efficient code in a few days. What is cooler is a built-in Garbage Collector that manages memory that is not in use anymore. Go programming guarantees code efficiency, which means faster software and business applications. Such well-known companies, like Apple, Facebook, Docker, New York Times, and BBC, have already been using Go for their projects. Look at the chart to see which industries are successfully utilizing Golang system programming for their software projects:

The reason why the Google team decided to launch a new programming language was a desire to combine the best features of different languages:

Today, many businesses find themselves using outdated technologies that are holding them back. They need to switch to a new one, but code refactoring and maintenance are rather expensive and time-consuming things. In such a situation, Go programming language becomes the perfect compromise: it’s a fast, high security, and high modularity language that doesn’t require difficult maintenance.

Where to Use Golang?

One of the main reasons for creating Golang is the desire to solve the problem of software scalability when your resources are limited by hardware. Go programming language is a good choice for networking apps and web servers, stand-alone applications and scripts, as well as microservice architecture for cross-platform applications. If you need high-skilled developers for one of the mentioned projects, Covent IT is here to help you fulfill your most daring ideas. Now we will take a closer look on when Golang may come in handy:

With Golang, it’s easy to create a pretty decent client/server application in a short term. Due to its multithreading and concurrency, Go language comes as the most viable option to maintain database connections and ensure better performance.

With a Golang framework, it’s possible to build a data visualization and admin panel in ten minutes, since everything is compiled into one binary and linked statically.

As you can see, the range of Go language use is wide. Along with its universality, a low learning curve is another advantage of Golang. As the Go code has clear syntax and requires little effort to learn, it’s easy to find Go programmers to support your existing app or website.

Saying so much about the advantages of Golang, you might ask, so why doesn’t everybody use it? Because no one language is perfect. For certain projects and website types, it may be more appropriate to use other languages. This is what will be discussed below. Let's compare in what cases it makes sense to give preference to Golang. 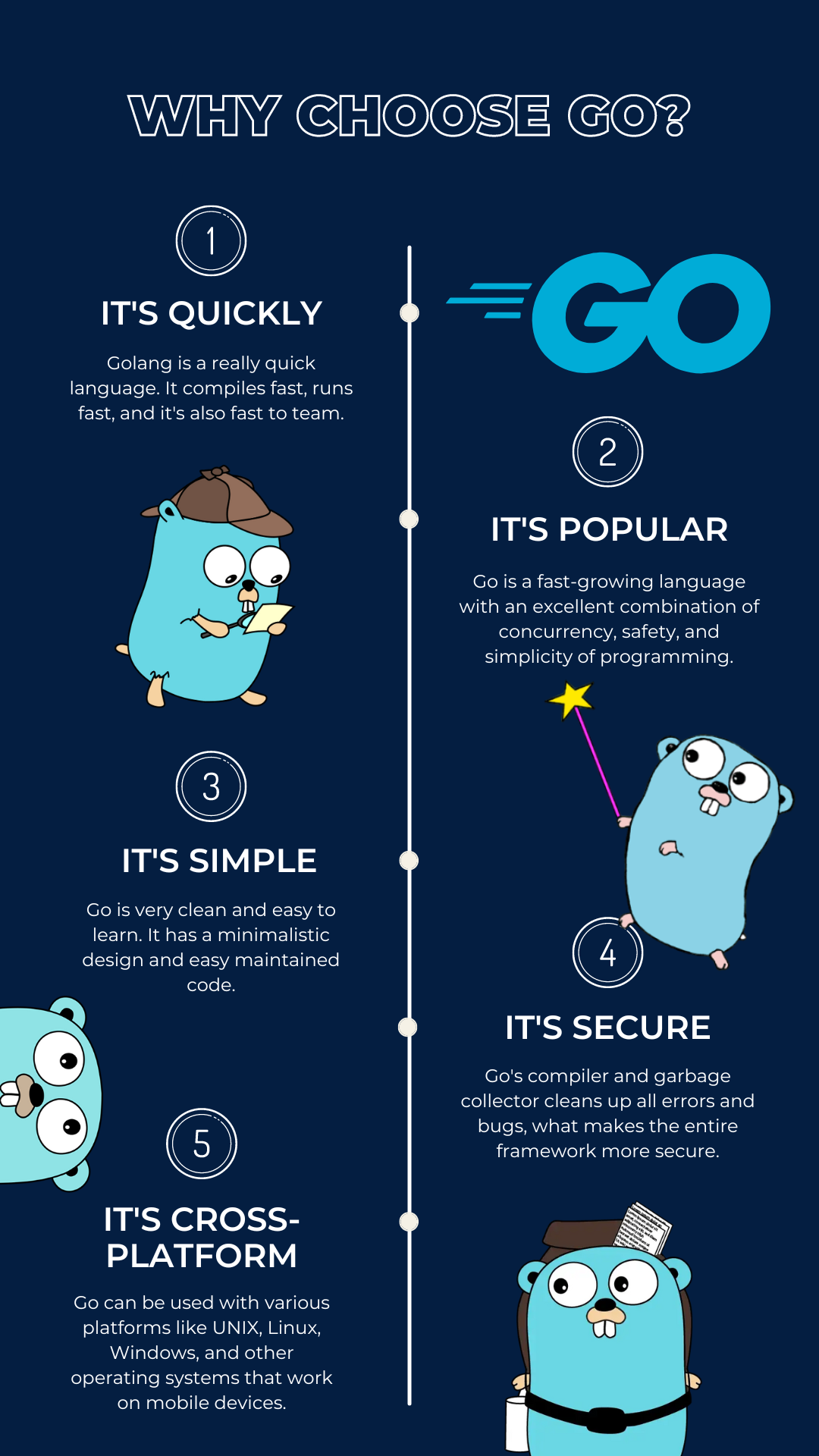 While Python remains the community’s favorite language, holding second place on GitHub in terms of requests (+ 17%), Go programming language is not that far from its competitor firmly holding fourth place (+ 8%). There are several important aspects that should be considered when choosing between Golang and Python:

Golang was built with scalability in mind. It comes with built-in concurrency to handle multiple tasks at the same time. Python uses concurrency, but it's not built-in: it implements concurrency through streams. This means that if you are going to work with large data, then Golang may be a better choice.

Python is not the best in terms of memory or CPU, however, with its huge number of libraries, Python efficiently performs basic development tasks. Golang has built-in functionality and is more suited for microservice architectures.

Python is great at coding for artificial intelligence, data analysis, deep learning, and web development. Whereas Golang is more efficient for cloud and cluster computing.

As mentioned earlier, Python's age gives it certain benefits. Some of them include numerous libraries and the huge community that supports them. Golang, on the other hand, is still a growing language and doesn't have many libraries and community support that Python has. However, don't underestimate Golang - its rate of growth and adoption by developers is incredible, and it's growing every day.

Conclusion: If speed is the priority, then Golang is the one to choose.

Java is a mature object-oriented language, while Golang is a considerably new one. Both of them are used to create efficient and reliable software. While Golang is faster than Java, Java has more features and better community support. Let’s see who wins in this battle of old vs. new:

With the growing business, an efficient business application has to be able to handle the growing number of concurrent requests. This is what Golang does best: its code can scale to multiple cores. Java’s scalability is limited due to the increased garbage collection latencies.

In the olden days, Java was considered to be one of the simplest languages. But, Golang has managed to surpass Java in this regard. Quick app development attracts businesses that want to reduce go-to-market time. And Golang can offer you business app development at the quickest possible time. Java’s high storage capacity and more memory consumption make it slower in terms of performance.

Due to its multithreading and concurrency capabilities, Golang is an ideal secure and modern choice for microservice architecture. Being a cross-platform, Java is designed to run anywhere, including microservices and Android apps.

Java is obviously an older language than Go, that is why it has strong community support and a large library. There is plenty of Java source code available for reuse - that significantly increases the speed of app development on Java. However, much of this library is outdated. Golang is not familiar with this problem. Though Go’s library is smaller, its code works well and fits modern standards of development.

Both Golang and C++ are statically typed general-purpose languages used for a wide array of applications. Golang is simple and compact. C++ is fast and complex. While Go is perfect for building projects with high speed, security and modularity (for instance, in the fintech industry), C++ is generally used to develop operating systems, browsers, games, etc.

Being called a DIY language, C++ doesn’t come with a lot of features, but it’s possible to build any feature you need if a developer is good at C++ programming. You can achieve some scalability using C++, but it takes more effort to write an error-prone code. Golang is primarily a more resilient language, so no coincidence that much software for scalability and deployments, such as Docker or Kubernetes, have been written in Golang.

One of the major advantages of C++ is performance. It takes time to code in C++ because it’s a difficult language, similar to machine code. But if we talk about running the program, C++ appears to be light, lean, and superfast. On the contrary, Go language is easier and faster in terms of the coding process, but it runs slower. For most projects, this difference may be barely noticeable, but if running speed is your priority then go for C++.

C++ is an open book among other languages, allowing you to create limitless types of applications. A C++ developer can easily access every part of the source code and make the needed changes. It’s even possible to create an operating system in C++. Go is a sealed language, and it’s not easy to access the inner workings in it. A shining example is a Go’s garbage collector which is a helpful thing. But if a programmer decides to modify the way a garbage collector works, he/she will spend a hard time trying to do this.

C++ has been long on the market, and it has a large community with answers and tips to almost any question a developer might have for C++. Go is a newer language, with not so many use cases, but it’s constantly growing in a number of fans. Despite the smaller community, it’s more alive. Because Golang is a relatively new language, the community behind it is excited to discover new things and features, and share fresh information.

Conclusion: C++ is a perfect choice for most desktop applications by Microsoft and other modern applications. Give preference to Golang when you need to solve scalability issues, for a web backend, or when resources are limited by hardware. It’s also good for writing code and maintaining infrastructure and platform-level tools and apps.

In the programming world, developers are always looking for easier and more friendly languages to meet the client’s needs and give the best possible performance. And Golang deals with this task successfully. Being a server-side programming language, Golang is a good choice for any web development project where there is a need for high performance and concurrency. Whether you need to create a distributed or multi-user interaction app, consider using Go. It will help get work done with a maximum result and minimum of puttering. DevOPs Technologies The Benefits of Using Amazon Web Services for Your Website: How AWS Can Help Your Business Grow DevOPs Technologies The Benefits of Using Amazon Web Services for Your Website: How AWS Can Help Your Business Grow AWS Benefits For E-Commerce Projects Software Development Avoiding Pitfalls in IT Outsourcing: Tips for Minimizing Risks How To Reduce the Risk of Outsourcing 85% of our clients come back to us for the second interaction.

You have successfully submitted your application. We will be happy to create a great product together with you! Our manager will contact you in the next 48 hours for details. Have a nice day!